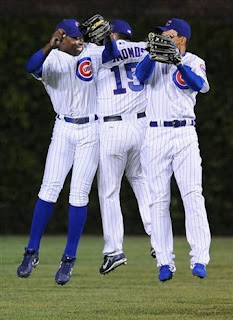 After the Chicago Cubs clinched the NL Central title, I came up with 25 guys that I thought should be on the playoff roster.

Now that the Cubs' opponent has been identified - the L.A. Dodgers of Alemeda County for those of you who don't know - I've come up with an updated roster.

Starting Pitchers:
If you would have told me at the beginning of the season that Ryan Dempster was going to be the Cubs' Game 1 starter in the NLDS, I'd be either piss myself laughing or just be pissed off.

But that's why you play the game.

Dempster won 14 games at Wrigley Field this season and will definitely be psyched to be pitching at the Friendly Confines.

After throwing the no-no against the Houston Astros, Carlos Zambrano has struggled and might benefit from the extra time between starts.

Having Rich Harden in the hole as the Game 3 starter makes me smile. He was dominant in Cubbie blue, and a well rested Harden could give the Dodgers some trouble.

Relief Pitchers:
Jeff Spellcheck is on the roster, that's official. So are Wood and Marmol. You can pencil in Marquis and Marshall as long relievers. Cotts is the Wild Card.

He pitched well in Sunday's loss, and the Cubs are in desperate need of a LOOGY to try to neutralize the left-handed bats of James Loney and Andre Ethier.

No Bobby Howry. After working around the New York Mets on Wednesday, he collapsed Thursday and on Sunday - helping the Milwaukee Brewers back into the playoffs.

Everyday Lineup:
Look up and down that 1-8 lineup and there has been a different hero everday.

Soriano' speed and power paces the top of the order. Lee, Ramirez and Edmonds anchor the middle. Soto, DeRo and Fuku at the bottom of the order give the Cubs an American League-style lineup.

Bench:
Going with 10 pitchers is risky, but I couldn't decide between Hoffpauir and Pie. Both provide the Cubs with something they'll need in the postseason. Hoffpauir's lefty stick and Pie's speed and defense.

Seeing that the Dodgers have a pair of power armed lefties, carrying two big lefty sticks is important for the Cubs.

That's it, for now, until a playoff roster is officially unveiled.