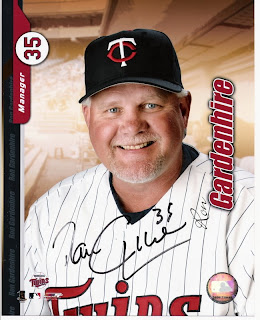 It's a serious question and not meant to be a jab at the recent struggles of the Chicago White Sox.

But let's think about this for just one moment.

No Johan Santana and no Torii Hunter, two of the franchise's best players in history.

Matt Garza has been solid for a Tampa Bay Rays team that is going to the playoffs for the first time in the team's history.

Francisco Liriano was garbage during the first half.

Yet, a win by the Minnesota Twins tonight puts them 1/2 game ahead of the White Sox as baseball enters its final weekend in a season where they were pegged to finish behind the Detroit Tigers, Cleveland Indians and in some opinions, the White Sox.

Now only the Sox stand in their way of a division title.

Ron Gardenhire has got to be the last great manager. Baseball manager. In the classic meaning of the word that baseball old farts get all nostalgic about.

Gardenhire has turned water into wine this season, and even though it's not over, it has to be considered a success.

In a world where baseball managers are expected to master massing the egos that come with big cash contracts, Gardenhire plays the role of a micromanaging button pusher.

And to this point, none of the button's he has pushed have been the self-destruct button.

The Twins' line-up, other than Joe Mauer and Justin Morneau doesn't strike fear in anyone.

The pitching staff, is full of young overachievers such as Nick Blackburn, Scott Baker and Kevin Slowey.

It's like having Scott Erickson, Eric Milton and Brad Radke all over again.

The team's best reliever is Joe Nathan, you can thank the San Francisco Giants for that.

"Gardy" isn't even close to being named manager of the year, unless Tampa Bay's Joe Maddon is found out to be a steroid dealing child molester in the coming days.

But she should get some consideration.