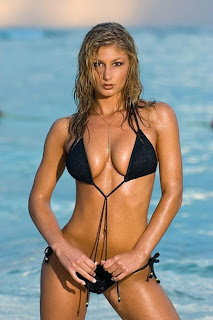 Apparently, this young lady is a New England Patriots cheerleader. Hence, more reason the Chicago Bears need to bring back the Honey Bears.

Welcome to the inaugural edition of The Fair Catch, a weekly pro football feature blog that will appear here on Monday mornings.

I understand Bill Belichick has a busy schedule ahead of him.

He's got film to watch and a prosperous social life, as well. So I understand why finding a quarterback to replace Tom Brady might not be priority No. 1 on his list.

Wait. You mean you watched your Sunday football with the mute button on all day? Surely you were on the edge of your seat awaiting what the good folks at ESPN had to say about the day's action, right?

Well, to be totally honest, if the volume on your TV was working, then you would have thought the loss of Brady was the equivalent of a national disaster at worse or that he was kidnapped Dan Marino-style (circa Ace Ventura: Pet Detective) at best.

To be honest, I'm surprised Belichick doesn't have a chryogenically frozen Brady clone thawing between Austin Powers and Ted Williams' cranium. Or maybe he does and we just don't know about it.

Anyway, the Pats need a new QB because Matt Cassel just doesn't cut it for a team that has won 20 consecutive regular season games. Luckily, there are plenty of options to choose from.

The rundown:
The Pats could always just stick it out with Cassel, who hasn't started regularly since high school, and hope he becomes the next Brady.

And if that fails, Patriots fans can use this to get through the upcoming season.