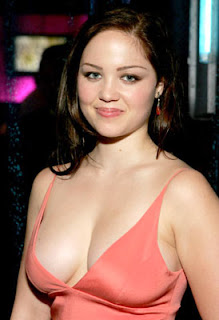 Today's eye candy is Erika Christensen. Who is she? I don't know. I began writing today's dosage at 12:28 a.m. and was needing a girl.

My buddy Anthony told me to go with her and I took his advice. It turned out much better than Sunday night's advice of extra "Ninja Turtle Shots."

On the other hand, I wouldn't mind taking a shot (or ten) with her.

It seems like it has been forever since I've done a shameless self cross-promotion, so I'll get to that in the Dosage.

Marquis went 1-for-3 with five RBIs, four of which came with one swing of the bat, deep into the New York night. Derrek Lee also homered as the Cubs topped the Mets, who would be the Cubs first round opponent if the playoffs started tomorrow.

25 Years Later: Part One. This story is part one of today's shameless self cross-promotion and will by my baby throughout the week.

The 2008 season of SIU football marks the 25th anniversary of the Salukis' NCAA Division 1-AA National Championship season. The Dawgs went 13-1 to bring a title to Carbondale.

Today's feature is about the relationship between head coach Rey Dempsey and quarterback Rick Johnson.

Johnson described Dempsey as a disciplinarian and a master motivator that helped guide the Salukis to the title.

Dempsey described Johnson as the perfect quarterback for a team that took years to build to that point because of his smarts and skills.

After losing out on the QB derby, SIU sophomore Joe Allaria has been practicing as a wide receiver, and is expected to see more time in the slot as the season goes on.

I first reported the story Sept. 10, and even though Allaria had fielded punts during summer training camp, the wide receiver experiment has just begun.

It's not like SIU hasn't done this trick before. Justin Allen, one of SIU's top receivers last year, was a converted QB after Nick Hill took control of the everyday No. 1 responsibilities.