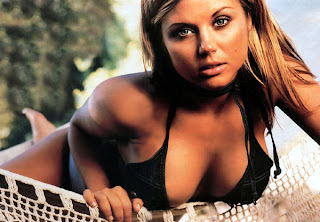 You know what would be great: a Sunday where the Cubs, White Sox and Bears all win games.

At least the Cubs did their part ... with a bunch of reject prospects and scrubs, nonetheless.

Feeling bad about the Bears? Cards? I'm sure Tiffani Amber Thiessen would love to help make your day.

I've come to the conclusion Tiffani (with an 'I') and Amber are like standard names for pretty girls.

Seriously, Zack Morris, you were a very lucky man.

Kelly Kapowski ... another great name for a pretty girl.

P.S. I'm gonna start "tagging" these girls so I knew who I've "done" in the past.

Back to your regularly scheduled program

Cub scrubs top Cards. Kosuke Fukudome and Felix Pie were the only two Opening Day starters in today's post-celebration starting lineup. They combined to go 4-for-8 with three runs scored in the Cubs 5-1 win against the Redbirds.

If Fuku and Pie played like that all year, there would have been no need for Reed Johnson or Jim Edmonds in center or Mark DeRosa in right.

One of these two guys will be on the postseason roster. One of them is still under contract for three more years at $12 million a pop.

What do Carlos Beltran, Jermaine Dye and Johnny Damon have in common?

They all came up through the Royals system only to be traded away for players to never be named on a major league roster.

Well, the Sox shutout the Royals, 3-0, who were playing without Brett, Saberhagen, Beltran, Dye and Damon.

Brian Griese beats Bears. I could have used that headline in years past, especially last year when Griese threw a billion picks to the Detroit Lions secondary, allowing the Cowardly Lions to walk away with a season sweep of the Bears.

All I need to put here is that Griese threw for 407 yards against the Bears.