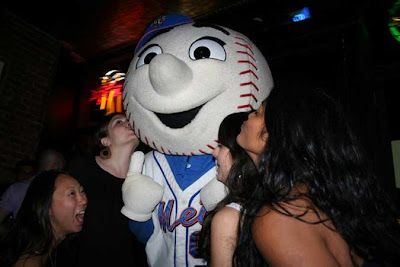 
I'm pretty sure as a Chicagoan, it's in my blood to have a disdain for everything that is New York sports.

John Starks and the Knicks.

Derek Jeter and the Yankees.

Victor Diaz and the Mets.

Who and the who?

Victor Diaz (with the help of LaTroy Hawkins) and Craig Brazell (with the help of Kent Mercker) helped break the collective heart of Cubdom in 2004 with a pair of home runs that helped seal another classic collapse by the Chicago Cubs.

And while the Cubs have the NL Central Division title and home field advantage throughout the NL playoffs locked up, there's one fan that has a little revenge on their mind.

I remember 2004 vividly. I remember breaking my television remote when I threw it off a brick wall in my dormitory when Hawkins gave up the homer to Diaz. And after Mercker got yarded by Brazell, a night of binge drinking and bad decisions ensued.

Someone needs to pay for that. And that someone is the 2008 New York Mets.

Nothing would make me happier than seeing the Cubs deliver the deciding blow to the Metrosexuals.

Sure, they've felt heartbreak. Ask the 2006 Metrosexuals who allowed an 83-win St. Louis Cardinals team win the pennant behind a game-winning Yadier Molina home run and a knee-buckling curveball by Adam Wainwright.

As painful as it was for them, imagine how it was for this young, impressionable baseball mind when his roommate jumped on the coffee table in celebration of the Cards' championship run.

OK, this is starting to turn into a rag fest, so I digress.

I was glad to see Jason "Grand" Marquis go deep against the Mets last night, but I'm not completely satisfied.

In the end, I want Ronny Cedeno to go 3-for-4 tonight against Johan Santana, taking the former AL Cy Young winner yard off a 3-2 changeup and hand him his first loss of the second half. I want to see David Wright take the collar against Sean Marshall. I want to see Jose Reyes swipe a few bags (only for the sake of my fantasy league), but see him stranded in scoring position.

It's up to the Cubs - who have the best record in the National League - to play spoiler.

I think that'd be grand.*