Bear with us, it's gonna be a long ride. 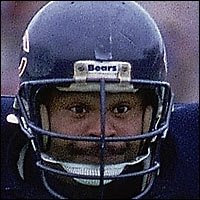 So you're probably wondering about this photo choice?

Well, it's Hall of Fame linebacker Mike Singletary. And I can guaran-f*cking-tee that he wouldn't allow Brian Griese to pass for 40 yards, let alone 407.

Look into those eyes.

Once your done changing after you've soiled yourself, read the rest of this post.

Steve Rosenbloom of the Chicago Tribune hit it right on the head.

Is it going overboard? No, not at all.

You can't lose to the Tampa Bay Buccaneers. Not at home. Not with a 10 point lead in the fourth quarter. Not with this defense that was supposed to be the second coming of the 2006 Super Bowl team.

So whose head should roll.

Sometimes you have to cut off the head of the monster to see results.

I feel bad for Lovie, who was the best coach ever when he was leading the Bears to playoff and Super Bowl appearances. His demeanor never changed, and everyone liked that about him.

But inevitably, it's turning into Dick Jauron all over again.

How long 'til the calls for Bill Cowher start coming.

Ron Turner should be burned at the stake.

The Bears offense is offensive, and that's putting it nicely.

There's talent with Matt Forte and Greg Olsen, but can we trust someone who apparently is using a high school playbook in the pros to put a productive offense on the field?

I didn't think so.

Every quarterback that has been under Turner's "watchful" eye has regressed to the point where they'll need shrinks 'til the day they die unless they're able to move on to another franchise where they instantly turn into Pro Bowl-caliber stars.

This is where you can get Lovie, too. Letting go of Ron Rivera was a big mistake then, and it looms as a bigger mistake with each passing down.

The defense is good, but the aggressiveness is gone. The heat is gone. The blitzes are down and the points allowed are up.

That was the joy of Rivera's 'D.' It was a combination of the best aspects of the Cover-2 and 46 defenses.

Prediction: You heard it here first, when Lovie is launched, Ron Rivera will be the Bears' first candidate to take over.

And maybe he can bring LT, Rivers, Gates and Merriman's roids with him from San Diego.

The only coach worth a damn on this staff seems to be Dave Toub, who would be a genius if he took the next coaching opportunity offered to him and ran with it.

Jump before the fire hits your floor!

All I know is that I'll feel a lot better if I wake up tomorrow and see that someone is paying for the travesty that is the Chicago Bears.