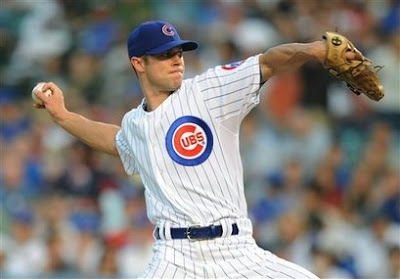 Ed. Note: I've come to the conclusion that each of Rich Harden's starts down the stretch are going to be crucial. So after each start, I'll provide the line for Richard James Harden until the season ends or his arm falls off. Whichever comes first.

Rich Harden has been ridiculously good since joining the Cubs. So while CC Sabathia grabs the headlines (and another beer brat) Harden continues to throw lights out for the North Siders.

In a good sign for Cubdom, a testy Harden said he is tired of being called injury prone. It could be worse, they could just call him Mark Prior.

So are Harden and Prior interchangeable? Barely.

Both are young, stud pitchers with high upside but are clear injury risks because of their past. It's like having a girlfriend who took you to a very special place, but only did it once and the only reason you keep her around is because she's dynamite in bed.