One AB 101 Years In The Making 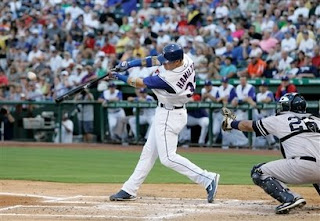 He currently stands as one of the elite power hitters in the American League, hitting .304 with 28 home runs and 114 runs batted in, and everyone knows about the 30 million bombs he hit at Yankee Stadium during the Home Run Derby. But what happened Sunday night hasn't been seen in more than 100 years.

Tampa Bay Rays manager Joe Madden asked for Hamilton to be intentionally walked with two outs and the bases loaded in the bottom of the ninth with the Rays hanging onto a 7-3 lead. Hamilton's RBI walk brought the Rangers within a run at 7-4 before Dan Wheeler retired Marlon Byrd to end the game.

The last time this happened was when Buck Showalter (then employed by the Arizona Diamondbacks) gave Barry Bonds the bases loaded free pass to force in a run. Better yet, Bonds was inserted in the game as a pinch-hitter for left fielder Chris Jones, who was 2-for-3 with two runs scored and one RBI.

Yet, Showalter walked Bonds, then walked a way with a victory.