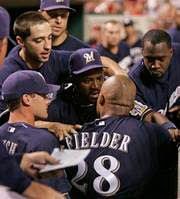 It's almost like clockwork. The Milwaukee Brewers are led into a pennant race by a youthful and talented squad of ball players such as Prince Fielder, Ryan Braun and J.J. Hardy. And then it gets ugly.
For the second consecutive year, the Brew Crew have gotten themselves into a brew-ha-ha among each other. In Monday night's 6-3 loss to the Cincinnati Reds, star first sacker Prince Fielder shoved lefty starter Manny Parra as he headed to the showers after being lifted for a pinch hitter. Apparently, the Prince took offense to Parra hitting the showers and felt he should stay and watch the rest of the inning with his teammates.
Hence, the shove heard 'round the Midwest.
Parra shrugged it off as something that happens "all the time" in the Brewer clubhouse. I'm not surprised, and you shouldn't be either.
Let's take a trip to 2007, shall we?
Remember when manager Ned Yost picked duked it out with then-catcher Johnny Estrada? And then followed that by pelting the Cardinals' Albert Pujols in a late-September game with pennant implications. It was retalliation after Fielder was hit by a pitch a few innings earlier. Pujols scored the tying run in a game the Brewers would eventually lose 7-3 as the Cubs moved a bit closer to their division title.
The 2008 Brewers began bumbling, stumbling and fumbling their chance at catching and surpassing the Cubs during as they hosted the NL Central leaders in a four-game series at Miller Park. The North Side Nine known for leaving their bats at home turned Miller Park into Wrigley Field North, outscoring the Crew 31-11, including an 11-4 romp in which the unraveling began.
With reliever Seth McClung warming in the 'pen as the inning started, former closer Eric Gagne threw a pitch behind Cubs center fielder Jim Edmonds, who earlier homered twice, on a 3-0 pitch. Doug Eddings immediately tossed Gagne, and McClung (who was the one who plunked Pujols by the way) immediately came in to deliver two high-and-hard ones to catcher Geovany Soto.
It was apparent to anyone with baseball accumen that those were purpose pitches and that the Crew was trying to leave the Cubs with some parting shots.
And even though there's plenty of ball to be played, the Brewers open today five games behind the Cubs in the NL Central. And even though they sit atop the NL Wild Card standings, they'll be fighting the likes of the Cards, Phillies and Marlins.
And of course, themselves.