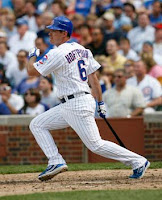 With a 4.5 game lead over the Milwaukee Brewers, the Cubs have a little bit of breathing room as the last month of the baseball season gets under way, which should allow manager Lou Piniella to rest a few players down the stretch.

Here are some players I think the Cubs should bring to the big club, in an attempt to give Piniella some help (like he'd listen to a student-blogger, anyway).

Numbers wise, Torres and Scales (30 and 31 years old, respectively) are basically 4-A players that are as likely to make an impact as you or me, but you never know with some of these players. You never know when there's an Orlando Merced or Tony Womack out there, waiting to contribute.

I'm pretty sure Lou has made up his mind and those players are already on their way to Wrigley Field as we speak or could be in town already.

Coming later this month (God willing) a blog on how to put together a playoff roster.