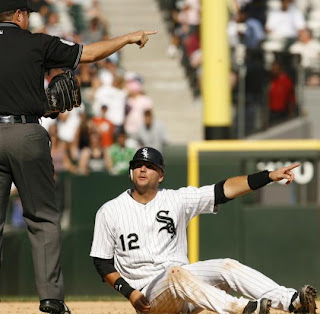 Hawk Harrelson is no longer allowed to complain about umpires, because it looks like the Chicago White Sox already got one on the payroll.

Three years after aiding the ChiSox to a game two victory in the ALCS, Doug Eddings reared his ugly head again.

Ugly, of course, if you're a Rays fan.

Need a re-hashing of the '05 ALCS incident? Via MLB.com [bottom]:

"Ironically, Eddings received national attention during Game 2 of the 2005 American League Championship Series between the White Sox and Angels when Pierzynski reached first base against Los Angeles after striking out. Eddings had been the umpire behind home plate, who ruled that the ball had hit the ground before Angels catcher Josh Paul [ed. note: Paul was a big-time White Sox fan, hence the conspiracy theories] caught the ball. Paul had rolled the ball back to the pitcher thinking Eddings had called strike three."

Here's an excerpt of what happened in Sunday's game:

"With the score tied at 5 in the 10th, Pierzynski ill-advisedly strayed from second base on a grounder and got caught in a rundown. He was tagged out after making contact — literally, A.J. made it — with Rays infielder Willy Aybar by sticking out an arm. "As soon as A.J. tripped, he yelled 'Obstruction!' " infielder Jason Bartlett said. Umpire Doug Eddings agreed that Aybar had gotten in the way and he awarded Pierzynski third base, which set up the Sox to score and avert a sweep."

"A.J.'s like the kid who calls "time-out" all the time during a fight and then gets in a late shot to your ribs."

Ready to bring out the buried lead? I know I am.

This all would have been avoided if center fielder B.J. Upton didn't lollygag after catching Carlos Quentin's deep fly to center. It's been a rough month for B.J., who basically set up A.J. for the winning run.

How's that for alphabet soup?

Long story short, you either love A.J. because he's a grinder or you hate him because he's got a horseshoe stuck in a particular region of his body.

Doug Eddings apparently loves him. I hope they exchange Christmas cards and find themselves under some mistletoe this December.

In response to: That's just A.J. being A.J., Doug being Doug. [Yahoo! Sports]