Wrigley Packs 30K And The Cubs Ain't Even There 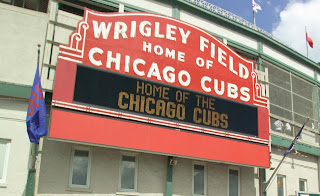 More than 30,000 fans filed into Wrigley Field on Tuesday night to see minor leaguers. That's really not news because that was what the Cub fans were treated to during the Andrew B. MacFailure era.

However, this time was different. Hall Of Famer Ryne Sandberg returned home to manage the Peoria Chiefs against the Kane County Cougars in the inaugural "Road To Wrigley" game.

Sandberg is in his second year as the head Chief, gaining managerial experience on a daily basis as he prepares to eventually take over the Cubs whenever Lou Piniella decides to call it a career. And if you're expecting the mild-mannered Ryno, you're wrong.

No, he wasn't a part of the Dayton-Peoria fiasco, but Sandberg has been described as feisty and has been thrown out of numerous games in his brief managerial career.

Do the Cubs have a Lou Jr. waiting in the wings? Who knows, but the bigger question is whether the Chicago media could handle blow ups by Sandberg and Ozzie Guillen on the same day or even in the same game.