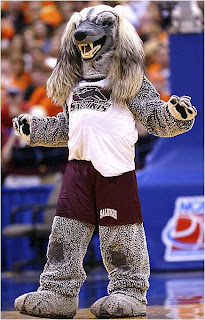 Courtesy of the Daily Egyptian.

And the understatement of the year goes to...

"They underachieved, obviously, but with us four coming in we should be able to pick that up. They need some kids who can score and help out, and I think we can really do that for them."

Gone from that squad are star forwards Randal Falker and Matt Shaw, who averaged 25.5 points per game, accounting for 40.7 % of the team's scoring (for those of you who want a lil' bit of Stat Boy action on a Monday morning.)

The only returning starter to average double digits is senior floor general Bryan Mullins. Mullins, the Missouri Valley Conference's Defensive Player of the Year, averaged 10.7 points per game and will be in charge of jump start an offense that averaged only 62.6 points per game during the 2007-08 season.

Filling up the basket would be a step in the right direction for a program known for its stifling defense. In 2008, the magic number for the Dawgs was 63, where they went 16-1 when scoring 63 or more points.