Offense Would Definitely Be A San Francisco Treat 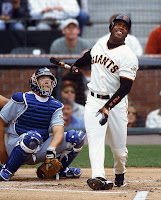 I guess I wasn't the only one who wasn't rounding the bases and scoring this weekend.
The San Francisco Giants scored 12 runs in their three-game series against the Chicago Cubs.

The only beneficiary was Tim Lincecum, who picked up his 11th win.

But really, 12 runs? That sucks! But I'm not surprised, they're run differential is minus-59. That means they've given up more runs than they've scored. And that's with Lincecum on the team.

Giants fans, do you miss Barry Bonds yet?

So you're thinking to yourself that putting up crooked numbers isn't something the G-Men are good at. But maybe there's something in the water out there.

Take into consideration that the San Francisco 49ers scored the least amount of points in the NFL in 2007 (219) and averaged 13.7 points per game.

At least the Bay Area has the Warriors, who apperently understand the concept that you can't win if you don't score. In the 2007-08 season, the Golden Stater's averaged 111 points. But they didn't make the playoffs.

Well, neither did the 49ers. Neither will the Giants.