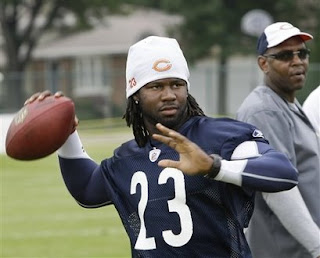 Devin Hester's days of striking fear into kickoff teams league wide might be over.
Now that he is handsomely paid, the Windy City Flyer will get every opportunity to earn a starting gig as a wide receiver. But the more time he sees split to the outside, the less time he will see standing at his own goal line doing the Soulja Boy.

Is that a smart move? Probably not. Hester's returns either go for six or put the Bears in a good place to start to get points on the board. And when they don't go for six, the ball is out of bounds or kicked to an up-man who will land the Bears great field position as long as he fields the ball cleanly and just falls on it.

Hester has security, but what will job be? (Chicago Sports)