Josh Hamilton, You Are Ridiculous! 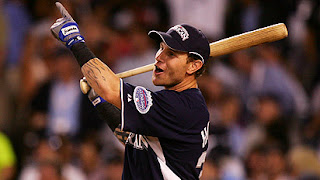 I understand that Justin Morneau of the Twins won the Home Run Derby. Yeah, he was my click to pick. And yeah, he's helping out the fantasy team. But count me in on the Josh Hamilton love fest.

28 home runs in the first round. 35 overall. And all it takes is the silly rule that all the home runs don't accumilate over all three rounds and Morneau wins the HR Derby with 22 home runs.

Golfers around the world must have been watching that spectacle green with envy, seeing a baseball player drive balls farther than they could.

I'm not sure if there are words to describe what the Rangers' slugger is doing at this point of his career.

Hamilton is not only the feel good story of the year, but his legend will grow as this generation of baseball fans will more than likely tell his story years from now to their children and their children's children.

It might be just me, but the only thing that would have made this story perfect would be if Jim Hendry had a time machine and undid the stupidity that was trading a player that would solve his ball club's biggest weakness.

Look, I've been one of the bandwagon drivers since the Cubs chose him No. 1 overall in the 2007 Rule V Draft and then for some unthinkable reason, traded him to the Cincinnati Reds for $50,000 cash.

And despite Jim Hendry's initial mistake, he could have made amends this off-season if the rumor was true that the Reds were asking for were Sean Marshall.

Lucky for the Reds, they ended up with All-Star Edinson Volquez.

I'll guess I'll stop now and give Hendry a hug and thank him for Rich Harden.