How The Cubs Will Win The Central 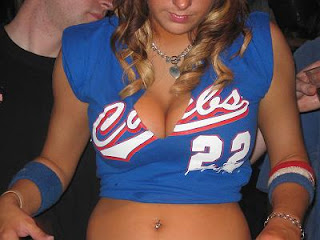 Win or lose, we'll still boobs .. er .. booze -- yeah, that's what I meant! Anyway ... am I the only person thinking that there's a slight chance that the girl pictured has a butterface? And if she did, would it matter? If you mix a Cubs fan, a girl with a nice body and a few Old Styles, you'll get a party. Book it!

The North Siders sent a team-record eight players to the All-Star Game in New York and still were unable to secure the all-important home-field advantage. However, the performances by Carlos Zambrano, Ryan Dempster and Carlos Marmol against the American League's best provide a glimmer of hope that they can continue their success into the second half.

Yet, one of those stars should be the team's major concern.

While most "experts" will try to tell you that the Cubs' second-half success depends on the golden right arm of one James Richard Harden, the North Side Nine will need reliever Carlos Marmol to be lights out.

Despite a solid 1.03 WHIP and 70 strikeouts in only 52.1 innings pitched, No. 49 has struggled of late. His ERA has ballooned to 4.13 and seemed to lose his confidence before striking two of the three batters he faced in Tuesday/Wednesday's All-Star Game.

How The Cubs Will Overcome. Two things: the starting pitching is going to have to go deep into ballgames to save the overworked 'pen and the Cubs' offense needs to keep it in high gear. If Zambrano, Harden, Dempster, Ted Lilly, Jason Marquis and Sean Marshall can eat innings and win ballgames, it can go a long way towards keeping the bullpen fresh.

If the Cubs offense can score at will like it has for most of the year, you're talking about those starters pitching low-stress innings in the dog days of August. A fresh Cubs team in September should win the NL Central easily.

However, the Cubs have the tough task of having to overcome their opponents and their past.