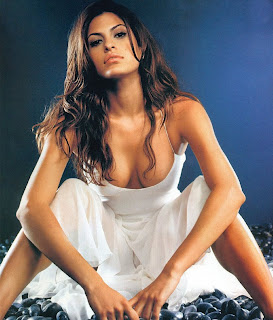 Lack of internet access will limit me to only one post this morning. That's sad, especially since I really wanted to do Brewers-Cubs and Sox-Twins previews, along with a recap of my day in the bleachers at Wrigley Field. Maybe a pic of the beautiful Eva Mendes will help calm your nerves.

Comeback Kids Of The Chi. The Cubs were down 5-0 against the Marlins. The Brewers were up 4-1 against the Astros. If I asked you who would be in sole possession of first place in the NL Central when the day was over you would have told me the Brewers.

But a solo homer by Derrek Lee tied the game and a three-run double to Mike Fontenot put the Cubs ahead to split the four game set against the Fighting Fish. Alfonso Soriano also went deep for the Cubs. Dan Uggla and Mike Jacobs (twice) played long ball to power the Marlin offense.


Sox Take Two. The White Sox pretty much just laid the Tigers season to rest by winning two of three in Detroit. The Sox blasted their way past the toothless-Tiger pitching staff, but was unable to take the final game of the series.

Even in the 6-4 loss, catcher A.J. Pierzynski and outfielder Jermaine Dye played a little bit of longball themselves. Dye homered in each game of the series.

Paid In The Shade. Devin Hester, you are now ridiculously paid! The Bears kick return extraordinaire and soon to be No. 1 wide out got his money right to the tune of four years and $40 million with $15 million up front.

See, I knew it wouldn't be long. What might take the most time is getting Hester into the flow of an offense lead by Dumb-and-Dumberer at the QB position. I wonder if the Bears know there's a future Hall of Famer on the market?