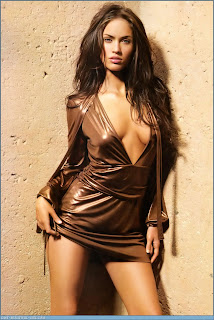 Did you know that Megan Fox was asked to gain weight for Transformers 2? That's like asking Tiger Woods to change his approach. Albert Pujols to change his swing. Peyton Manning to change his throwing mechanics. WTF are you thinking, people?

Did You Know? Here's a good one for ya. Did you know Carlos Quentin leads the AL in home runs? His 26th, a three-run shot off Rangers closer C.J. Wilson, helped the ChiSox win the game, and the series.

Quentin looks to be making up for the offensive threat lost by the Pale Hose when they sent Chris Young to the Diamondbacks in exchange for Javier Vazquez.

Pack Your Bags, We're Goin' Camping! The Bears opened camp Wednesday short a camper. Return man extraordinaire Devin Hester enters day two of a contract hold out. Hester feels he is underpaid and is looking for a new deal. And it's not like he's out of line here. He's only got a million return touchdowns and potential through the roof as a wideout.

Too bad the Bears offensive minds couldn't run an offense if they were handed Tom Brady, Randy Moss and an opposing defense of seventh graders.