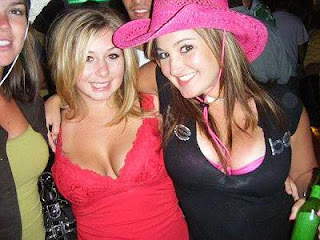 These young ladies are courtesy of the Chicago Sun-Times' hottest fan debate. Notice anything? It looks as if they are not wearing Cubs or Sox garb. At this point, does it matter? Heck they could be Cardinals fans for all I know, but I wouldn't mind taking in a ballgame (or a few beverages) with these young ladies, no matter where their allegiances stood.

On to the Dosage.

Giants Win All-Star Duel. Tim Lincecum and the San Francisco Giants bested Ryan Dempster and the Chicago Cubs in a battle of All-Star starting pitchers. Lincecum struck out nine batters in eight innings of six hit ball to pick up his 11th win of the season as the Giants avoided the sweep at the hands of the Cubs with a 4-2 win.

For Dempster (10-4), the loss was the first he's suffered at Wrigley Field this season.

And who knew Jose Contreras was Cuban for "Jason Marquis"? Contreras allowed 10 hits, seven runs (all earned) in only four innings. Yet, he didn't even factor into the deciscion.
Stat of the Day: Jermaine Dye (who should be in Tuesday's All-Star Game) went 4-for-5 with his 19th homer and 54th, 55th and 56th ribbies of the year.