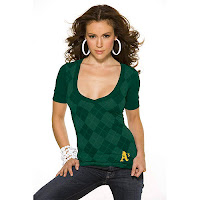 Seriously. I wonder what Alyssa Milano's BABIP is?

I'd like to take a look at why when and how Billy Beane has lost more talent than the former Montreal Expos and still can be competitive in the AL West.

He's had Cy Young winners (Barry Zito and Mark Mulder) and staff aces (Tim Hudson and Rich Harden) to go along with MVPs (Miguel Tejada and Jason Giambi) all come up through his system and all leave Oakland for greener pastures.

How does he do it?

Zito: I think Beane got a little lucky with Zito moving across the Bay, especially when you take into consideration Zito tweaked his mechanics after signing that record deal with the Giants. It was a disaster from the beginning.

Mulder: Beane retroactively pissed on Cardinals GM Walt Jocketty and simultaneously screamed "No homo!" in the process. Mulder's been injury riddled in his time with the Redbirds and in exchange he got (among others) Dan Haren, which he turned into Arizona Diamondbacks prospects Greg Smith and Dana Eveland.

Hudson: If anyone was gonna get the better of Beane it would be John Schuerholz. Hudson has won 52 games in four-plus seasons. Juan Cruz, Charles Thomas and Dan Meyer haven't really panned out.

Harden: Beane and the A's are treating Chicago like its own personal farm system. Months after getting Gio Gonzalez, Ryan Sweeney and Fautino De Los Santos from the White Sox for Nick Swisher. The Athletics acquire Matt Murton, Sean Gallagher, Eric Patterson and Josh Donaldson.

Donaldson, Gallagher and Patterson were ranked Nos. 5, 6 and 8 according to Baseball Prospectus' Top 11 prospects.

Tejada and Giambi: Both left after MVP seasons with the A's and both were linked to BALCO. In the end, the A's got compensatory draft picks.

And in the end, that's what it's all about with Billy Beane. When you can't compete with the big boys like the Los Angeles boys and the New Yorkers you have to find other ways to beat the system.

My cap's off to you Billy Beane, master of the maneuver.